Laurin Pepper is probably better known for his football career, both as a player and a coach, than his short career as a big league pitcher.  Pepper, who appears to have gone by Laurin for his baseball career but Hugh everywhere else, was an All-American halfback at the University of Southern Mississippi, and was selected sixth in the 1954 NFL draft by the Pittsburgh Steelers.  He opted to sign as a "bonus baby" with the Pirates, ending his football career, and requiring the Pirates to keep him on their roster for the entire 1954 season.  He appeared in only 14 games that season, making eight starts and earning a record of 1-5 with a 7.99 ERA.  Over parts of four seasons with the Pirates, Pepper compiled a record of 2-8 with a 7.06 ERA.  He pitched in the minors between 1958 and 1963 with affiliates of the Cardinals, Pirates again, Angels, Dodgers and Phillies.  He had multiple stints within the Pirates' minor league system. 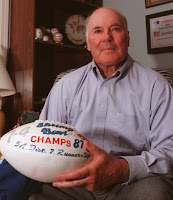 After retiring from baseball, Pepper served as a high school football coach for nearly three decades at Ocean Springs High School.  He had 25 winning seasons and his teams won 12 Gulf Coast Conference championships.  Pepper was elected into the Mississippi Sports Hall of Fame in 1977.

Building the Set
December 2, 2000 from Raleigh, NC - Card #209
I went nuts and bought 16 common cards for our 1956 Topps set on this day at the Sports Card & NASCAR Collectibles Show in Raleigh.  My records show the 16 cards set me back $55 which I would have considered to be a small fortune back then.  I hadn't yet moved back north yet, so I was still living in Raleigh at this time planning for my eventual escape.  I would have provided my Dad with an updated checklist following this show as he was back in New Jersey.

The Card
Like a few of the Pirates cards before this, Pepper is shown wearing the helmet required by then Pirates General Manager Branch Rickey.  I found this summary from SABR explaining Rickey's introduction of the helmets in September 1952, to be worn at all times by Pirates players and coaches - at bat and in the field.  Clicking on the link below for the Pirates team set will take you to a gallery of Pirates cards found in the set so far, with a majority of the players wearing these helmets.

Pepper's only two mainstream baseball cards can be found in the 1955 and 1956 Topps set, and both cards use the same photo.  The cartoons on the back of this card do a great job of summarizing Pepper's career path up until that point.  This card was reprinted in 2005 for Pepper to sign and for inclusion in the 2005 Topps Heritage Real One Autographs insert set.

1956 Season
Pepper appeared in just 15 games in 1956, making 11 appearances with the Pirates and four starts with the Triple-A Hollywood Stars.  With the Pirates, he went 1-1 with a 3.00 ERA over seven starts and four relief appearances.  His sole win came during the second game of a double header on June 24th, when he shut out the Cubs through five innings.  The game was ultimately called due to rain and a curfew in place in Pennsylvania at the time.

Phillies Connection
Pepper pitched in 12 games in 1962 for the Dallas-Fort Worth Rangers, an American Association team affiliated with both the Phillies and Angels.  He went 0-5 with a 5.68 ERA.

5 - Pepper non-parallel baseball cards in the Beckett online database as of 6/13/20. 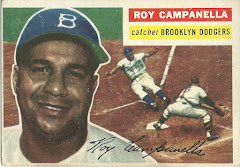