Bill Virdon was the 1955 N.L. Rookie of the Year, winning the award in a year in which he hit his career highs in both home runs (17) and RBIs (68) as the every day center fielder for the Cardinals.  In May 1956, the Cardinals dealt Virdon to the Pirates, and that's where he'd play the rest of his big league career.  With the Pirates, Virdon was the team's regular center fielder for the decade between 1956 and 1965, winning a Gold Glove in 1962 and a World Championship with the club in 1960.  He led the league in triples with 10 in 1962 and finished in the top ten twice for assists by an outfielder due to his strong throwing arm.  Virdon retired following the 1965 season to focus on coaching and managing, but was activated for a few games in 1968 when the Pirates had a rash of players depart for military service.  For his career, Virdon batted .267 with 81 triples, 91 home runs and 502 RBIs.
Virdon managed for parts of 13 seasons in the majors, compiling a lifetime record of 995-921.  He was named The Sporting News' Manager of the Year in 1974 and 1980.  He had three first place finishes during his managerial career, with the Pirates in 1972 and with the Astros in 1980 and 1981.  Virdon also had four different stints as a coach with the Pirates (1968-1971, 1986, 1993, 2001-2002) and briefly returned to the Astros as a coach in 1997.
My earliest memory of Virdon is when Phillies broadcaster Richie Ashburn (#120) told viewers during the 1980 NLCS that Virdon reminded him of his elementary school math teacher.  (That might not be the exact quote, but you get the gist.)
Some text for this post originally appeared on my 1965 Topps blog. 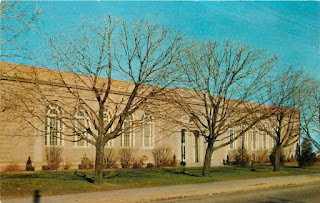 Building the Set
February 2, 1991 in Millville, NJ - Card #96
1991 was a black hole year in terms of collecting our 1956 Topps set.  We only added three cards to our set (I think . . . see here for explanation) and as I was a junior in high school when this card was purchased, I had college, girls, friends and general high school stuff on my mind and not necessarily old baseball cards.  My notes show this card was purchased at a baseball card show held inside Millville Memorial High School (Millville's junior high school where I attended 8th and 9th grades) for $5.  My Dad spent several decades as a guidance counselor at Memorial, so we may have even ventured up to his office the Saturday of this show.  Thinking about Memorial High School now, I'm reminded of its "old building" smell and the indented stairs that led upstairs to the second level, worn down from nearly a century of foot traffic.

The Card / Cardinals Team Set
This is Virdon's first Topps card and his rookie card appeared in the 1955 Bowman set.  The action shot here could be absolutely anyone, as the fielder's face is completely obscured.  The first panel of the cartoon on the back mentions the trade that originally brought Virdon to the Cardinals.  On April 11, 1954, Virdon was one of three players, along with Emil Telling and Mel Wright, dealt by the Yankees to St. Louis in exchange for slugger Enos Slaughter (#109).  The second cartoon panel attributes Virdon's improvement as a hitter to his decision to start wearing glasses.

1956 Season
It's odd to see the reigning Rookie of the Year traded in the season after winning the award, but that's what happened with Virdon.  He was the opening day center fielder for the Cardinals and appeared in 24 games with the club before the May 17th trade to the Pirates.  Virdon was dealt to Pittsburgh for outfielder Bobby Del Greco and pitcher Dick Littlefield.  The Pirates were slowly rebuilding and Virdon found himself inserted as the team's new regular center fielder with Lee Walls in left and Roberto Clemente (#33) in right.  In 133 games with the Pirates, Virdon batted .334, leading the team, and had eight home runs to go along with 37 RBIs.  He overall average for the year of .319 placed him second in the league after Hank Aaron (#31), who hit .334 overall. 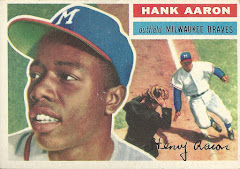