Hank Bauer was a hero during World War II before joining the Yankees and winning seven World Series rings with the club as their regular right fielder.  Bauer was consistently dependable throughout his Yankees tenure, and between 1950 and 1959 he batted .279 with an average of 15 home runs and 60 RBIs per season.  Bauer owned a 17-game World Series hitting streak, still a record today as tied by Derek Jeter, and contributed a three-run triple in the decisive Game 6 fo the 1951 World Series.  He slugged four home runs in the 1958 World Series, his final postseason action as a player.  Bauer was a three-time All-Star between 1952 and 1954, and earned MVP votes each year between 1952 and 1956.  He was dealt to the Athletics in December 1959 as part of the deal that brought Roger Maris to the Bronx.  While Maris went on to set the single-season home run record, Bauer played in parts of two seasons with the Athletics, becoming their player-manager in June 1961, before retiring as a player and focusing on his managing career.  Bauer retired with 1,424 hits, 164 home runs, 703 RBIs and a .277 career average.
His first managerial stint with the Athletics lasted only through the 1962 season.  He joined the Orioles as a first base coach in 1963, and was promoted to their manager following the season.  Bauer guided the Orioles to their first ever World Series title in 1966, sweeping the heavily favored Dodgers in four games.  His success with the Orioles waned after a few years and he was fired on July 10, 1968, to be replaced by Orioles' first base coach Earl Weaver.  Bauer managed one last time, returning to the Athletics, now in Oakland, for the 1969 season.  His lifetime managerial record was 594-544-1.  Bauer managed the Mets' top farm team in Tidewater in 1971 and 1972, before leaving the dugout for good.  He was inducted into the Baltimore Orioles Hall of Fame in 1990.
Building the Set
February 7, 2007 in Voorhees, NJ - Card #292
This is one of six cards I purchased at the Echelon Mall Baseball Card show in February 2007, spending $70 total, including $12.50 on this Bauer card.  At the time, Doug was a few days away from turning two months old and we had just celebrated my Dad's 63rd birthday a few weeks earlier.  I also realized as I was composing this post that Bauer passed away just two days after we had added his card to our set.

I think Jenna had been out shopping on this day when she texted (or called) me to let me know there was a baseball card show being held at what used to be the Echelon Mall.  The former mall has since been converted as part of the Voorhees Town Center.
The Card / Yankees Team Set
Bauer is one of only eight players featured in the set's second series who were also in the 1954 and 1955 Topps sets, and who appeared with the exact same photos.  This is a sharp drop from the 32 players appearing in the set's first series for whom their photo was the same used in 1954 and 1955.  The majority of players in the set's second series were those who had been exclusive to Bowman over the past few years, so Topps had to come up with new photos for those players.
I'm calling Bauer safe on the play at the plate.  If the photo is from 1955, the only two American League catchers who were #9 that season were the Senators' Bob Oldis and the Tigers' Jay Porter.  Porter didn't catch in any games against the Yankees that season, but Oldis caught in two games against the Yankees in April 1955.  My best guess is the action photo is from April 13, 1955 when the Yankees destroyed the Senators, 19-1.  In the seventh inning, with Oldis catching, Bauer was the last of three runners to cross the plate on a bases-clearing triple from Bob Cerv (#288).

1956 Season
Bauer was again the opening day right fielder for the Yankees, with Mickey Mantle (#135) in center and Elston Howard (#208) in left, and it was the fourth straight season in which he earned that honor.  He'd start three more opening days for the Yankees before moving on to the Athletics in 1960.  Bauer hit career highs with his power numbers, slugging 26 home runs and driving in 84 runs, but his average slipped to .241.  He appeared in 147 games overall, making 128 starts in right and seven starts in left.  When the Yankees reached the World Series for the second consecutive year, and the seventh time in Bauer's eight seasons so far with the club, he hit safely in all seven games against the Dodgers, beginning his then record 17-game World Series hitting streak. 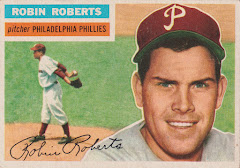